You may well be one of the two million who’ve watched Dame Stephanie Shirley's TED talk on women and ambition. But if you’re not familiar with the groundbreaking business woman, consider this a brief introduction. After being put on a train out of Nazi Germany at five years old, she grew up in the UK determined that hers “would be a life worth saving”. Now in her 80s it is fair to say Stephanie has racked up enough achievements to last several lifetimes. At a time when a woman couldn’t even open a bank account without her husband, she co-founded what would become a multi-million-pound technology business. She went on to programme the black box flight recorder for Concorde, together with her almost entirely female team. Having empowered a generation of women in technology, she eventually transferred ownership to her staff, creating 70 millionaires in the process. This is what happened when we sat down to discuss feminism, female entrepreneurship and filtering that survival instinct...

Debbie Wosskow: How did you come up with the idea for your female-focused company?

Stephanie Shirley: I’d worked in the public sector and been horrified to find there were two salary scales – one for men and a much lower one for women. I really felt that wasn’t fair and I’ve always been concerned with trying to make the world a fairer place. I’d been patronised as a Jew, I’d been patronised as a woman, and I’d had enough. So in 1962 I decided to set up the sort of company that I would like to work for – a company of women, a company for women. It was based around the really revolutionary, disruptive concept of software being something that could be sold. At the time it was being given away free with the hardware, in the same way that a car manual might be thrown into the box for you. And so, Freelance Programmers was born.

DW: Tell us about your pseudonym, Steve...

SS: In my innocence, I was signing new business letters with this double feminine of Stephanie, which is my name, and Shirley, which is my marital name, and getting basically no reply whatsoever. This was in 1962, when women couldn’t get a mortgage or hire a car and certainly couldn’t start a business without a male signature alongside. So my husband suggested that I use the family nickname of Steve. I started writing the same letters with Steve Shirley, and – surprise, surprise – I began to get some meetings and the company took off.

DW: You previously told The Jewish Chronicle that “young women today have got it dead easy”. What did you mean by that?

SS: In my generation, we had legal barriers to what you wanted to do. You couldn’t work on the stock exchange, you couldn’t fly a plane or drive a bus – you were just not allowed to. Today, these things are legally open to you. But there are more difficult problems because you’re left with the overhanging cultural implications. There’s enormous quiet pressure to keep women down. We have this gender gap in that the women are congregated at the bottom of organisations and are not promoted above a certain level to get the high salaries. That gives a culture of macho male values.

DW: When you started Freelance Programmers, you had £6 and worked from your dining-room table. What would you say to an aspiring female founder in 2020?

SS: If you want to get away from the corporate world into one where you’re in control, where you can build a collegiate atmosphere, where you can have a lot of fun and laughter, then starting your own business is a pretty good formula. The competition today is enormous because it’s easier to start without capital – you’ve got crowdfunding if you can’t get an angel investor, so there’s really nothing holding you back. I would encourage you to try; it’s been marvellous for me.

DW: When the workplace discrimination legislation was introduced in the 1970s, you had to welcome more men into your 300-strong workforce. How did that go?

SS: It was a learning curve, and the first few appointments were just terrible.

SS: Probably both. They promoted themselves in a way that we women traditionally daren’t: “Yes, I can do that! I’ve had plenty of experience in that!” And we believed them. So the first few men we took on were incompetent at what we employed them to do. Some of them joined just to be in the company of intelligent, bright women.

SS: Yes, it was very useful for that. But we learnt how to recruit properly. I worked on values instead of qualifications and experience – was this somebody I could trust? Was this somebody I’d like to work with? Was this somebody who had a similar sense of humour or the right work ethic to go on, even when things get tough? That’s called value recruitment.

DW: Let’s talk about motivation. You’ve been quoted as saying, “I feel I need to do something each day to justify my survival.”

SS: It’s a Jewish thing. I’m very conscious that I escaped the Nazi Holocaust and I was very, very lucky to be fostered by a Christian couple in this country. But when I was about six, people were saying to this small child, “Aren’t you lucky to be saved?” I was very lucky, but you don’t say that to a young child. Unfortunately that had a pretty bad impact on me. I felt guilty for having survived, and that I needed to justify my existence. Of course, that can have very good results – I don’t fritter my time away, I do meaningful things as much as I can. But the feeling is as strong today as it was all those years ago, and I’m not sure that’s healthy.

DW: What’s the best piece of advice you’ve ever received?

SS: Somebody once said to me years ago, “Take more of a risk.” As entrepreneurs we do take quite a lot of a risk – that’s why we get high reward when the risk pays off. But take the bigger gamble – employ the younger person rather than the experienced person, for example. It that means you’ve got a vibrant, diverse organisation that can face the future. The future, certainly on the technical side, is going to be very, very different. You have to have that resilience to move and stay with it, otherwise you will be out of date. So my main advice is to take more risks. 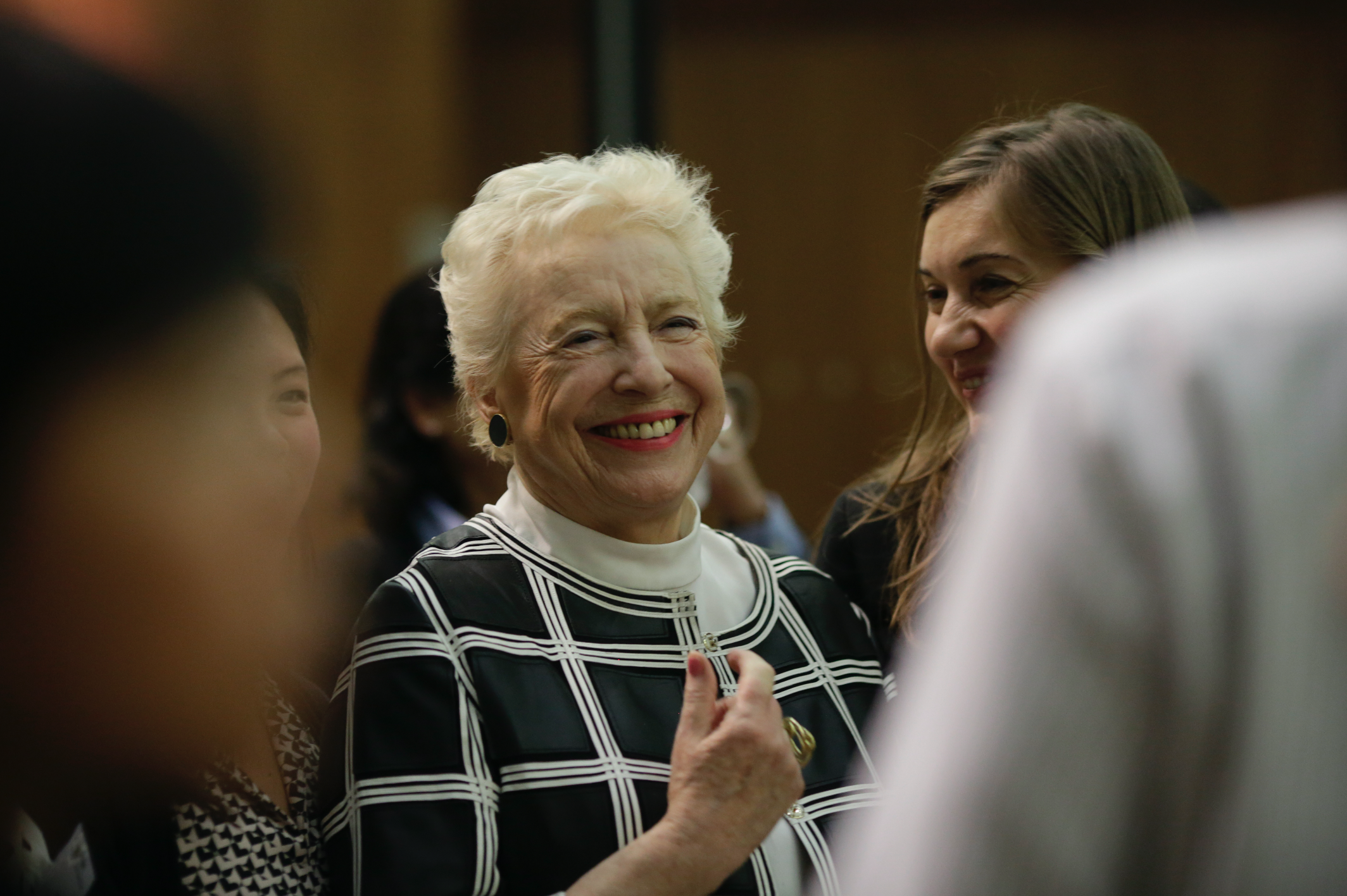 Dame Stephanie Shirley. Photo by AllBright magazine
Life Lessons From Dame Stephanie Shirley
On Success
“The older you get, the more you realise the things that really matter in life are not the material things.”
On Empowerment
“Empowerment is the key to business success: not the blind surrender of power and responsibility to whoever wants it, but targeted empowerment, to people who have been painstakingly selected and nurtured.”
On Ambition
“I wanted whatever talents I had to be fully used, and the only person who was going to make that happen was me. I also resolved that I would stop congratulating myself on the little I had achieved in my life so far. Resting on one’s laurels is the surest route to stagnation. Instead, I would keep aiming higher and higher, giving free rein to my instinct. If I failed, so be it, but I would never get into a position where I would curse myself for not having tried.”
On Giving Back
“Philanthropy is about putting your money to uses you believe in, and taking pleasure from the process. It is realising its potential: wealth as numbers on a bank statement transformed into wealth that enriches the world – and, as a result, enriches you.”
On Letting Go
“I have struggled all my life with an instinct to hang on to the things that matter most to me, to control and protect them myself. Yet the art of surrender is, I am convinced, a key to many kinds of success – and fulfilment. And many lives are limited by a failure to master it.”
On Hope
“Even in the blackest moments of despair there is hope, if one can find the courage to pursue it. Sometimes the worst is less overwhelmingly awful than we fear; sometimes the right attitude can create good, even from life’s most terrible situations.”
On Adversity
“When everything you possess is on the line, you tend to find reserves of drive and commitment that you didn’t know you had when you were less exposed.”
Read More...
Believe
How To Help, Support, Donate & Educate BLM
Believe
8 Tried And Tested Ways To Beat Lockdown Lethargy
Build
People Looked Down On Me Because Of My Accent – So I Called Them Out On It
Sign up to the AllBright Edit Newsletter
We don't send emails often, but when we do they're really good
About Allbright
Terms and Conditions
Privacy Policy
FAQs
Careers
Contact