She’s a fashion designer, wife, mother, grandmother, activist, trailblazer and now, of course, icon. But above all of those things, Diane von Furstenberg, DvF to most, is one of the most successful and enduring businesswomen on the planet.

As the inventor of the wrap dress, worn by everyone from Michelle Obama to Kate Middleton to Oprah, DvF’s working life epitomises the American Dream – the daughter of a holocaust survivor who married a prince and crossed the Atlantic to build a hugely successful business (twice over) all in The Big Apple.

Today, we’re meeting in the very city that made her. It’s a blue-sky, blustery winter morning in Manhattan’s Meatpacking District, where the AllBright team are preparing for the opening of our next outpost – a brand-new club that will sit in the middle of one of New York’s most vibrant districts.

DvF knows the neighbourhood better than anyone. Over the last 20 years she has played a pivotal part in the regeneration of the area. “The Meatpacking District was so bohemian when we arrived, full of artists and drag queens and creatives… We used to sit and drink in the bars on Gansevoort Street – it was a lot of fun,” recalls the 72-year-old as we sit in the sprawling warehouse office that is home to her 5,000 square foot flagship store, 150 of her staff, and also her New York apartment.

“My upbringing is at the core of who I am. My mother, as a holocaust survivor, was intent that I grew up fearless and independent.”

“I am so delighted that the AllBright is coming to New York,” she says with a genuine smile. “It is so in line with all my beliefs – highlighting women and giving a platform for their voices. I’m excited for everything we can create together here.”

To understand DvF, you need to first understand where she came from. Born in Belgium in 1946, she was born just 18 months after her mother Lily was liberated from Auschwitz weighing just 49lbs and on the brink of death. Today, she credits her mother with instilling in her the unwavering self-belief that empowered her to build and withstand the highs and lows of fronting a business empire.

“My upbringing is at the core of who I am. My mother, as a holocaust survivor, was intent that I grew up fearless and independent,” she says. ‘I was not allowed to be afraid of anything. If I was afraid of the dark she’d lock me in the closet. It sounds brutal but after five minutes of being in there, when your eyes adjust, you realise it’s actually not dark anymore.”

Over tea she recounts how her fashion empire began when she came to New York. DvF arrived as a young princess in 1969, with her first husband, Prince Egon von Furstenburg, and a suitcase full of jersey dresses she’d made while working as an apprentice to the Italian textile manufacturer Angelo Ferretti at his factory. When the legendary Vogue editor Diana Vreeland admired DvF’s early designs, the figure-hugging iconic wrap dress in its first iteration was brought to the world in 1974 and became the cult item for every woman in New York – from Warhol’s legion of party animals at Studio 54 to the stiffer Upper West Side set. “In the 1970s, somehow that dress became a symbol of liberation,” she adds. ‘It was sexy enough to get the guy but safe enough that his mother wouldn’t mind. It was everything. It made the woman wearing it feel confident.” 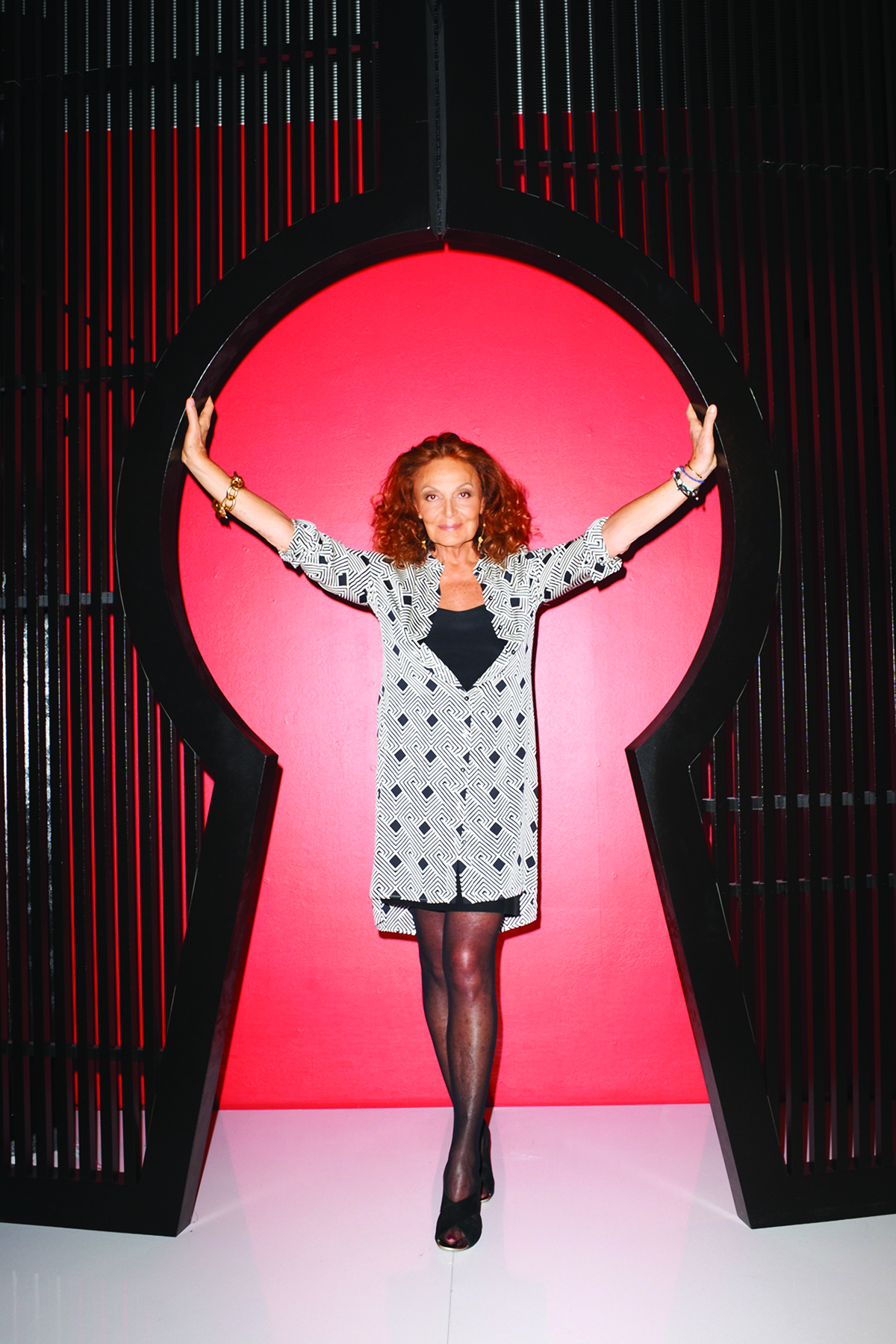 By the time she starred on the cover of Newsweek in 1976, aged just 29, she’d already experienced more than many people do in a lifetime. She’d moved from Europe to the US, had two children, built a hugely successful fashion brand, sold more than a million wrap dresses and purchased the 5th Avenue apartment of her childhood dreams.

But as anyone who has built a business will know, it’s not always plain sailing. By the mid 1980s, over-saturation combined with a fall in demand for her dresses forced DvF to sell many of her licenses, diluting the essence of what she had originally created.

“When I was on the cover of Newsweek, I appeared at that point to have the world at my feet, but I knew the situation wasn’t as good as it seemed or looked,” she reveals. “Similarly, when people said it’s all over, I knew that wasn’t true either. Nothing is ever finite – it’s all a work in progress and failing is a part of that. Nothing stands still. Things can change and be changed. It’s all a matter of perception.”

And so DvF left New York for Paris. While there she founded a publishing house and took time to regroup. She returned to New York in 1990 and relaunched the DvF brand in 1997, at the age of 50 – with the wrap dress back at the centre of her collection. It was what she describes as her “comeback”. Yet the return demanded a departure from her previous life. A new start, in a new area that was full of potential – and that was Meatpacking. “When I came back to New York it was a difficult time,” she admits. “I thought I’d lost my identity. My brand was being sold in discount stores and had lost its way. That’s when I decided to move away from our space on the Upper East Side and start afresh downtown.” 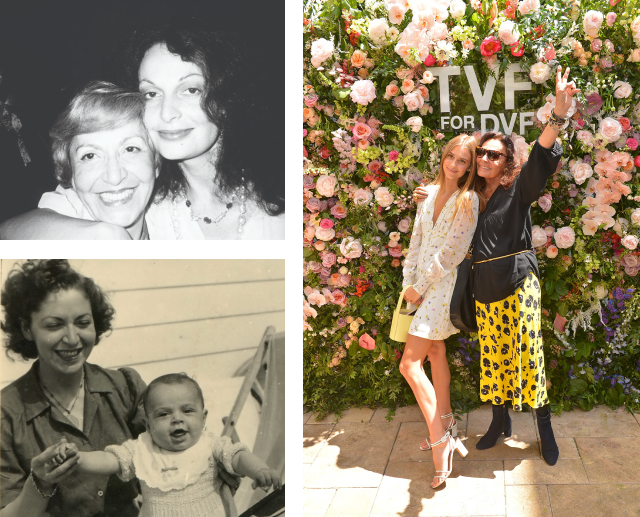 Her next move was to buy a carriage house on West 12th street. “Everyone thought I was crazy at the time,” she laughs. Twenty years on and the Meatpacking District has been transformed, although the area still retains the buzz she was initially drawn to. That same feeling of potential and people coming together was exactly what attracted AllBright to the area too. “Soon after I moved here I met two young guys who had a dream of transforming this elevated railroad into a park”, DvF says, referring to the High Line, which, together with her husband Barry Diller and their Diller von Furstenberg Family Foundation, she saved from demolition by contributing over $50 million towards its regeneration. The elevated park – an oasis amongst the hustle and bustle of the city – is now one of the most visited tourist attractions in Manhattan, with millions of visitors each year.

It was no mean feat to rebuild her fashion empire but as any entrepreneur knows, you have to understand how to fail to succeed. And today, despite making Forbes’ World’s 100 Most Powerful Women list and being one of TIME Magazine’s 100 Most Influential People twice, DvF still says she feels like a “loser” at least twice a week. “It’s true!” she insists, “All people who are successful have had a feeling of being small.” Her resilience and realism in her approach to the tougher times is refreshing and truly inspirational.

Perhaps even more inspiring is DvF’s unwavering dedication to empowering other women. Her focus has now shifted beyond designing dresses to fronting an entire movement, InCharge, a platform that she hopes will inspire women the world over to achieve their goals. And a sentiment entirely aligned with the AllBright’s mantra: Sisterhood Works.

“When I was a child I didn’t know what I wanted to do, but I knew I wanted to be in charge and it’s only now that I’ve formalised what it is,” she says, matter-of-factly. “I’ve experienced enough to have lived two lives, but the secret to that really is simple: own it. Own your imperfections and they become your assets; vulnerability becomes your strength.” 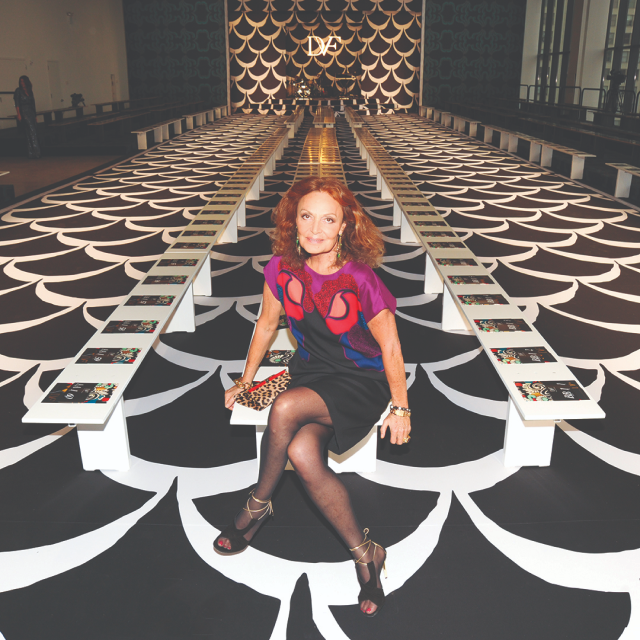 On the runway of a 2014 shows (Photo courtesy of Diane von Fürstenberg)
“Own your imperfections and they become your assets; vulnerability becomes your strength.”

It’s impossible not to be inspired by her words. If we’re simultaneously creating sisterhoods, providing support networks and encouraging environments where we’re in charge, more women will rise to the top, smash glass ceilings and become success stories to inspire future generations – just as DvF has done.

“I’ve never met a woman who’s not strong – we can pretend that we aren’t because we are afraid, but if tragedy strikes then women take over, so it’s better to discover your strength before there is a tragedy. It’s inside all of us,” she says. “Even when I’m fed up and depressed and tired – and believe me, it happens – I have myself and I am me. That’s why it’s so important to nurture a relationship with yourself. I can’t stress that enough.”

DvF really is a woman who lives by her values. Championing plans to level the playing field in business, she is throwing herself into a wide array of philanthropic projects, advocating for women and the community. As well as sitting on the board of women’s leadership network Vital Voices, she also hosts the annual DvF awards – a ceremony that honours four women each year who have shown extraordinary strength and leadership in commitment to their causes. She’s also a prolific public speaker and a regular writer, continually using her influence for good.

Last year, for example, she also became known as the ‘godmother’ of the Statue of Liberty after producing and starring in Liberty: Mother of Exiles, an HBO documentary about the monument and DvF’s dedication in raising funds to bring the institution to life. “My mother had written a note to me that was published in my book, saying ‘God saved me so I could give you life, and by giving you life I got my life back, you are my torch of freedom.’ The man running the Statue of Liberty foundation had read my book and that’s how he got me. They wanted me to raise $100 million, so I raised the money and I pitched the documentary to HBO and I ended up being in it too.”

As AllBright expands into new territories, launches new projects and we continue to grow our network, 2020 is set to be our most pivotal year. And, just as DvF welcomes our newest club to her neighbourhood, we are delighted to bring her into the AllBright fold as both an investor and new collaborative partner to help us drive positive change for women everywhere. “It’s a new decade, a round number, the year of the woman,” DvF says, as we finish our tea. “It’s also the 100-year anniversary of women voting in America and 400 years since the Mayflower Pilgrims arrived in America – the new world! We can’t miss this moment. It's a call to action and every woman has to embrace it.”

The AllBright will be co-creating a series of events at the DvF flagship store in the Meatpacking District throughout the year. The AllBright New York will open on West 15th Street in late 2020.

Read More...
Believe
Stop Being Ashamed Of Success & Claim It
Become
I Left The Corporate Grind Behind To Launch My Own Beauty Brand
Believe
The One Thing That Finally Stopped Me From Self-Sabotaging
Sign up to the AllBright Edit Newsletter
We don't send emails often, but when we do they're really good
About Allbright
Terms and Conditions
Privacy Policy
FAQs
Careers
Contact