Spend a few minutes in the company of Naomie Harris and you’ll quickly forget you’re in the presence of a Hollywood megastar. There is nothing guarded or aloof about the north London-born, Cambridge-educated actor. Nothing bland or clichéd about her responses to my questions. Perhaps because, unlike many of her A-list contemporaries so often struck dumb by fear of a PR storm, she seems to be entirely comfortable with speaking her mind.

Harris, 43, belongs to that rare breed of actress who is almost as well known for what she says off screen as on it. Eloquent, engaging and ferociously smart, she has spoken out in the past about her passion for the environment, being a woman of colour in Hollywood and sexism in the industry.

Take her turn as the steely Eve Moneypenny in the James Bond franchise, when she famously asked the press to stop referring to them as “Bond girls”, as she found the term demeaning, preferring “Bond women”.

Harris prioritises complex, fascinating female characters and has always been incredibly choosy about the roles she takes on. To date, her CV includes stellar performances as Winnie Mandela, barrister Gail Perkins in the film adaptation of John le Carré’s Our Kind of Traitor, and an impressive turn as drug-addict Paula in the Oscar-winning hit Moonlight, which earned Harris her own Academy Award nomination. 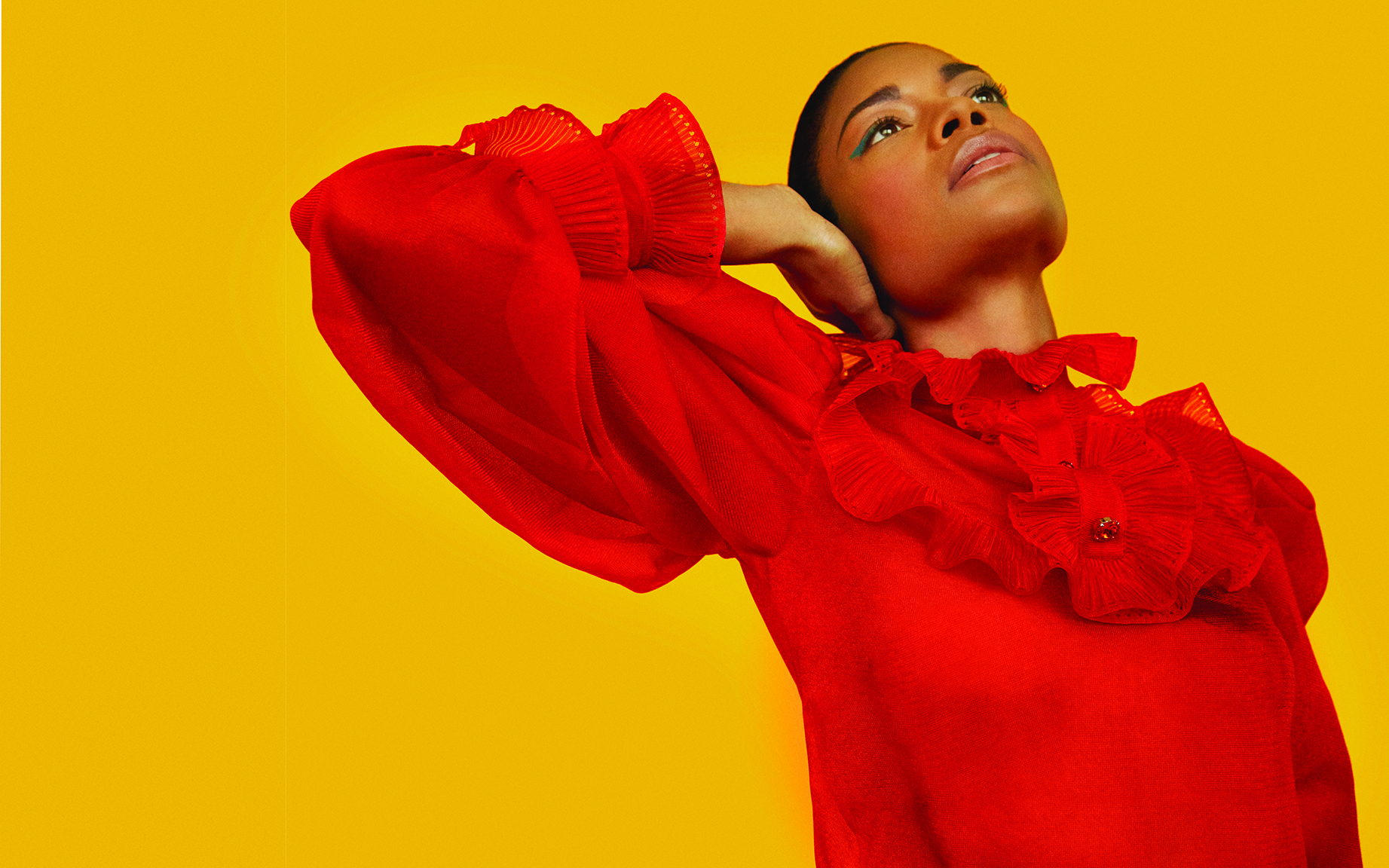 "I think we have been sold a lie, ultimately, that women are the weaker sex. I grew up in an environment full of strong, powerful women."

Harris explains that strong female roles are the only ones she’s interested in playing, because she knows them to be the truth. “That’s my experience of being with women,” she says. “I think we have been sold a lie, ultimately, that women are the weaker sex. I grew up in an environment full of strong, powerful women - my aunts, my mum’s friends, and also my mum, who is this really incredible role model for me. I want to represent those women, because that’s what I know to be my truth.”

Harris grew up working class, the only child of a single mother - a former journalist turned healer. The two are extremely close and still live on the same street in north London. She had no relationship with her father, who left her mother before she was born, until four years ago, when she sought him out as part of a form of therapy she was undertaking. He featured briefly alongside her in an episode of the BBC’s Who Do You Think You Are? in which Naomie discovered her tangled ancestral roots, finding out she is descended from both salves (which she expected) and slave masters (which she did not). It’s a fascinating, emotional watch. “Family is really important to me,” she explains. “It’s vital to my sanity.” And, it would seem, her education. It was her mother who persuaded her to continue her studies when all Harris wanted to do was pursue acting, leading her to Cambridge to study social and political science. Ascribing to the notion of ‘you need to see it to be it’, she recognises the influence that comes with succeeding as a working class woman of colour in an environment where the majority of students were very much not that. She has said in the past that “it’s an important statement, given my visibility, as to what can be achieved from any background”.

And achieve she has, though in her own way and on her own terms. It was only last year in the action thriller Black and Blue that Harris was seen in her first lead role - as a rookie cop who witnesses her fellow police officers commit a murder and unwittingly captures it on her bodycam. 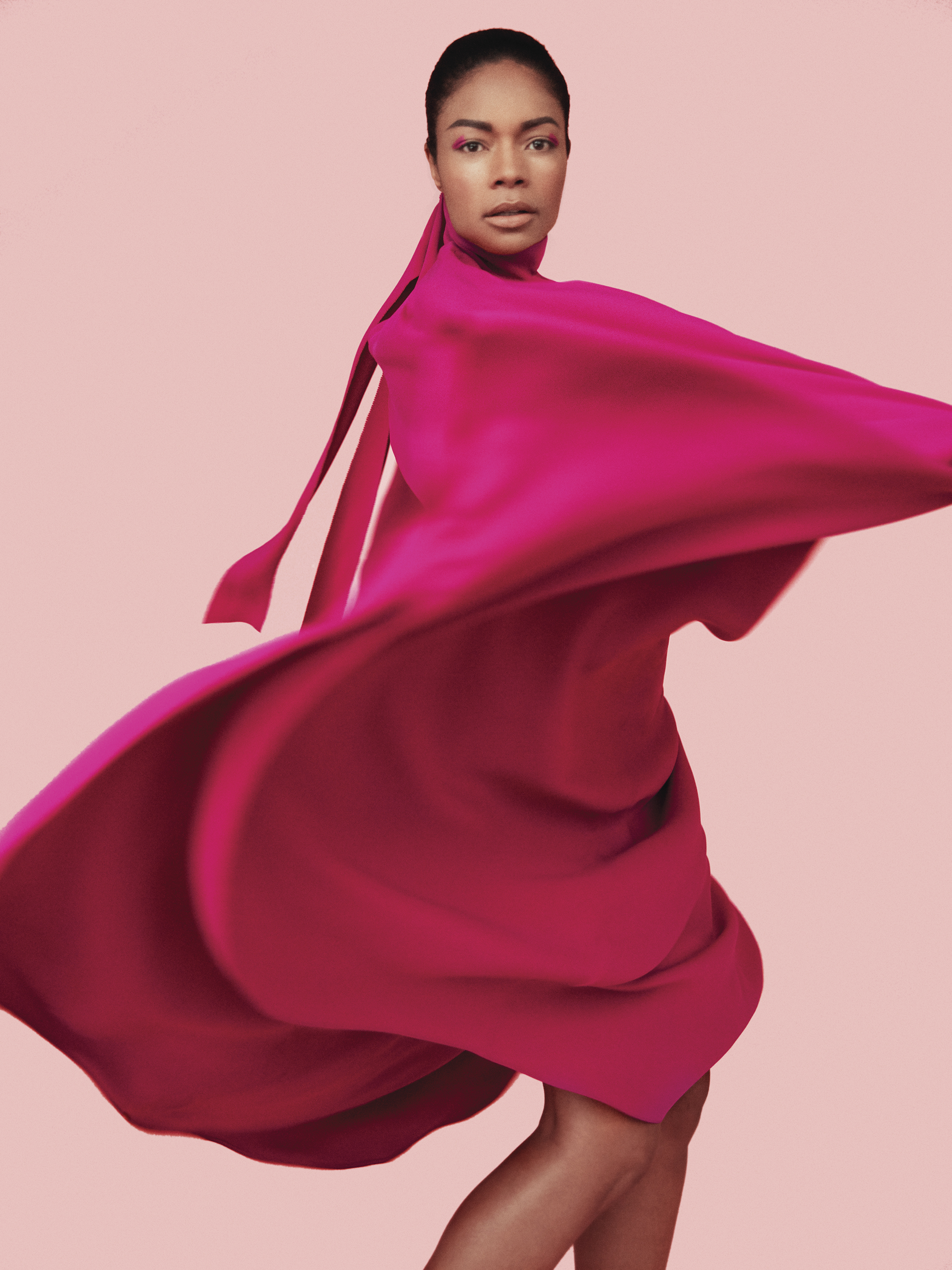 “I’ve always said that I never wanted to play a lead, because as the lead you’re in every scene, you have the weight of the movie on you,” she says. “I find acting pressured enough as it is. I love it, it’s my chosen profession, but you’re running on adrenalin a lot of the time, so I thought, ‘Being number two or three on the call sheet is perfectly fine’.

It was the script that swayed her. “I’d just done the Moonlight awards season and I was burnt out,” recalls Harris. “But it’s so unusual to have a female lead who’s a cop, and the film deals with so many topical issues. It’s just a beautiful story about how one person can make a difference, which I think is a really powerful message that we need right now.”

The shift to leading lady came about after Moonlight - the last film Harris expected to make a difference. “Throughout my career people have said, ‘When you do Pirates of the Caribbean, that’s going to really change your career.’ Or when I did 28 Days Later, ‘all the doors are going to open for you now’. But what really had the biggest impact was Moonlight. It has meant a huge shift in terms of the amount of material that’s come my way - I wouldn’t have been offered the lead in Black and Blue if it wasn’t for Moonlight, for sure.”

“There’s been a massive shift. It’s becoming much more of an egalitarian environment, a safer environment for women - and that’s what it always should have been.”

At this point we should we should be talking No Time to Die, Daniel Craig’s last outing as Bond, in which Harris reprises her Moneypenny role. But since the COVID-19 outbreak has pushed release back by six months, there isn’t a huge amount to say. So we focus on the role of women in the latest franchise and whether we’re likely to see more fully fleshed-out female characters thanks to Phoebe Waller-Bridge’s involvement in their the writing. “I would say we’ve seen a gradual progression to the women’s narrative being in the foreground, and I think this is going to be the biggest exploration of that,” says Harris. “It makes complete sense, therefore, that Phoebe joined the writing team.”

Along with Bond, Harris has noticed other seismic changes within the industry with regards to women, especially since the Time’s Up petition, which she publicly signed. “I’m actually blown away by how powerful the movement has been in changing culture,” she says. “There’s been a massive shift. It’s really wonderful to see, because it’s becoming much more of an egalitarian environment, a safer environment for women - and that’s what it always should have been.”

She’s also happy to report that the way Hollywood sees mature actresses is changing, and Harris is living proof of that. In the past few years, her career has gone stratospheric, with her Oscar nomination coming at the age of 40 swiftly followed by an OBE for services to drama that same year. “If you look at the most successful actresses, they’re in their fifties and sixties,” says Harris. “I don’t know how old Meryl Streep is, or Judi Dench, but these women are the most sought-after actresses in their profession. If you love your craft and do a good job, there’s room for everyone at every age, and that’s really fantastic to see.” 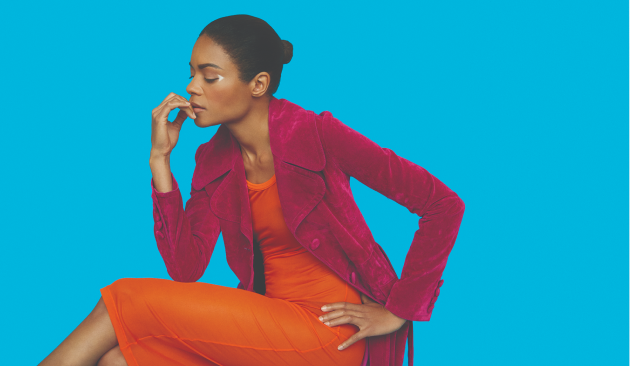 Alongside acting and female empowerment, there’s one more cause close to her heart: sustainability. Harris says it’s something she’s been interested in ever since being diagnosed with a rare condition as a teenager that meant she had to look after her health and her diet. “I was very focused on the power of good nutrition to heal the body and I wanted to understand where our food came from. Because the more that we abuse nature, the more it affects the food chain.” She now eats a largely plant-based diet and is very conscious about the way she consumes, whether it’s what she eats, the events she goes to - such as the Formula E Championship for electric cars, which she attended in Monaco earlier this year - or what she wears.

As a result, she became the face of H&M’s Conscious collection earlier this year, where all the pieces are made from sustainable materials, such as organic cotton and recycled polyester. “I know lots of people knock H&M and fast fashion, and no brand is going to be perfect - this is a road with pitfalls and people are going to slip up. I don’t think you should knock people who are trying to progress in the right direction, and that’s what H&M is doing. The power is in our purse, through where we choose to spend our money - it’s about having awareness about which brands are supporting sustainability and which aren’t.”

I ask if we can expect to see her in more lead roles in the future, now that she’s nailed her first one. She laughs. “I never thought I’d play a lead, but then I absolutely loved it. So I’ve said to my team, ‘Ok, just lead roles from now on!’” Somehow, I don’t think she’ll have any problem with that.

Read More...
Believe
Ambition Took Me To The Top Of The Ladder, Then I Wanted To Get Off
Build
A Realist’s Guide To Making A Successful Career Change
Become
Big Boss Energy: Diane von Furstenberg On The Secrets Of Her Success
Sign up to the AllBright Edit Newsletter
We don't send emails often, but when we do they're really good
About Allbright
Terms and Conditions
Privacy Policy
FAQs
Careers
Contact